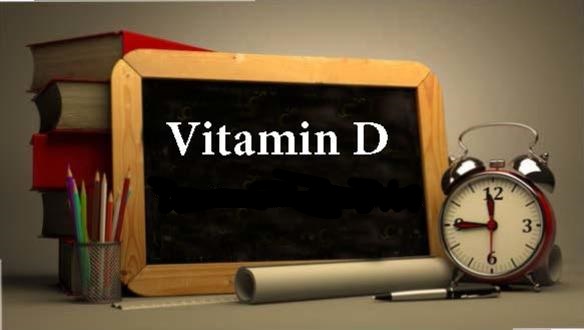 Music soothes not only the savage beast, but the heart and soul of you and you and you! Maybe that's why so many musicians, from DeeDee Bridgewater ("Dear Ella") to Dee Snider ("I Wanna Rock") and Dee Clark ("Raindrops"), can make you feel so good.

Turns out that the Dee -- vitamin D, that is -- has more power to protect your happiness, heart and lungs than was previously known.

A study in the European Journal of Preventive Cardiology found that people with D levels in the top 25 percent had a 4.3-fold greater amount of cardiorespiratory fitness than those in the bottom 25 percent! That's because vitamin D helps provide muscles with more oxygen and that gives you more power, whether you're walking, biking or dancing.

Here's how to make sure you get enough D:

From food: Fatty fish, such as salmon and ocean trout, mushrooms and foods fortified with vitamin D are good sources.

Au natural: There's no benefit from sun exposure from October 15 to April 15, north of the line between Los Angeles and Atlanta -- you're not making D-2; sun exposure in winter only fosters skin cancer. 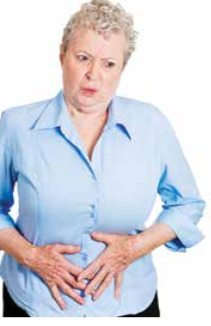 "No food after midnight"! That was one of the "rules" for avoiding trouble that down-and-out Rand (Hoyt Axton) was given when he bought an extraterrestrial fuzzball named Gizmo (voiced by Howie Mandel) in the 1984 comedy-horror film "Gremlins." Unfortunately, the rule was broken (along with "don't get them wet or they reproduce") and the result was an onslaught of ravenous, destructive creatures that turned his family's Christmas into a nightmare.

For a lot of folks, violating the "no late meals" rule also triggers nightmares ... of the digestive kind. Roughly 20 percent of Americans contend with gastroesophageal reflux disease, also called acid reflux or GERD. It's caused by a weakening of the lower esophageal sphincter muscle. Instead of closing after you swallow food or liquid, it flaps open, allowing stomach acid to flow upward, causing burning and pain along the esophagus.

What brings on this distress? According to a study that looked at 513 GERD sufferers, eating a big dinner in the evening, or only eating once or twice a day, was a major cause; so was drinking peppermint tea daily (who knew?!) and eating fatty, fried, spicy, sweet and sour foods. The researchers suggest eating more than three times daily. We recommend that you enjoy your largest meal at breakfast or noontime, and stick with plant-based, unprocessed foods and lean proteins.

For your holiday dinners (they're around the corner!), don't deep fry that turkey, and plan on early afternoon for feasting. That'll help keep the gremlin GERD out of your house! 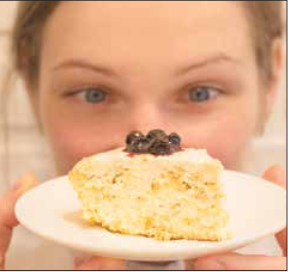 When Joe Coleman pitched for the Philly Athletics, Baltimore Oriels and Detroit Tigers from 1942 to 1955, he could only hope his baseball talent would be passed on to the next generations of his family. Well, it was! Son Joe Coleman pitched for 15 seasons from 1965 to 1979 -- a two-time 20-game winner -- and today his grandson Casey Coleman is with the Cubs Triple A team in Des Moines, Iowa.

Sometimes it's talent that's passed down, and sometimes, unfortunately, it's health challenges such as obesity and addiction. A new study published in Translational Psychiatry explains how choices made during pregnancy and breastfeeding affect the health of future generations.

Swiss researchers fed healthy female mice a high-fat diet during pregnancy and while nursing. The repercussions showed up in three generations of their offspring (those generations didn't eat excess fat, and neither did their mates). They had changes in their brain's dopamine-powered reward system that predisposed them to "develop obesity and addictive-like behaviors ..."

Seems your choices today may force your next three generations to battle obesity, addictions and the health problems associated with those conditions.

So how much and what kind of fats should you eat everyday to protect your health and the health of future generations? Stick with fats in nuts, oils like extra virgin olive oil and animal proteins like salmon. Then, on a 2,000-calorie-a-day diet, aim for 20 to 35 percent of calories (400 to 700 calories or 33 to 78 grams) from those good-for-you fats. That's good pitching and good hitting!

Safe sex for folks over 65

In 1970, when Stephen Stills recorded "Love the One You're With," it became a rallying cry for the hippy "free love" movement (more myth than fact, but the lyric helped sell a lot of records).

Well, if that's your era, and today you're still sexually active, you're still part of a very, should we say, robust movement, according to the National Poll on Healthy Aging. More than 1,000 people ages 65 to 80 were polled: Nearly three-quarters said they had a romantic partner, and 54 percent of them were sexually active.

They claim that they're not shy about it, either: 62 percent said if they were having problems with their sexual health, they would talk to their primary care provider. Unfortunately, only 17 percent had. That's a gap that's putting many older folks at risk.

Sexually transmitted diseases are at an all-time high among the elderly. From 2007 to 2012, the incidence of syphilis among seniors increased by 52 percent; chlamydia increased by 32 percent. And, according to AARP, every year since then has seen about a 20 percent jump in the incidence of STDs.

The reason? Divorce rates are up, while erectile dysfunction medications are easily available, and docs don't spend enough time talking with seniors about safe sex.

Well, it's time to get proactive. Ask your partner(s) about their sexual health, and get tested yourself. Medicare now offers free STD screenings for seniors. And use condoms -- many seniors don't. Keep it safe to love the one you're with.

Is your antiperspirant putting you at risk for dementia?

"Don't sweat the petty things, and don't pet the sweaty things," comedian George Carlin once said. But staying cool, calm and collected isn't always easy. That may be why as many as 90 percent of Americans use deodorants and antiperspirants regularly, spending $18 billion a year in pursuit of pristine pits.

Ironically, though many of you worry about schvitzing (only 2 percent of you don't get smelly from sweat in your pits, groin, hands or feet), you also may sweat over the safety of the stuff you're applying under your arms. One ingredient in antiperspirants (not deodorants), aluminum chlorohydrate, is often targeted as dangerous. It stops you from perspiring by reacting with your sweat and creating gel plugs in your sweat glands' ducts, shutting them off.

Since the 1960s, when some poorly designed studies made people scared of aluminum (even in frying pans), it's been rumored that it could contribute to the development of Alzheimer's disease. But a 2001 study examined aluminum levels in urine of people who used antiperspirant daily and found that only 0.012 percent of aluminum from these products was absorbed through the skin. That's just about 2.5 percent of the aluminum you'll absorb over the same time period from food. And a larger review of research, published last year, concluded that there's not enough evidence to show that regular use of deodorants and antiperspirants increases your risk for dementia.

So that's one less thing to sweat over. Now where's that sweaty dog?

Eating to tamp down inflammation 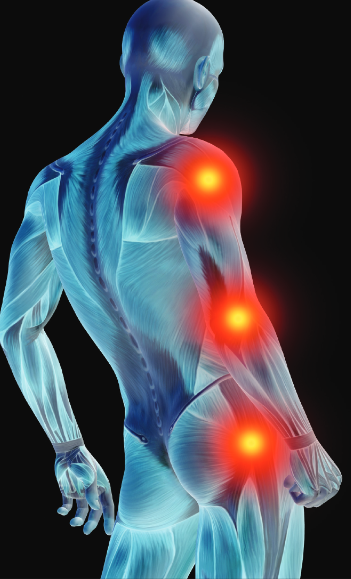 When you have a kitchen fire, you might grab a fire extinguisher, but you wouldn't crank up Spotify. Well, maybe the day's coming when you would. Students from George Mason University have invented a deep bass sonic blaster that uses sound waves to put out fires. The technology knocks out flames in small, confined spaces.

It would be great if that kind of gizmo could sing away chronic inflammation in your cells!

Inflammation is a result of your body's immune response when it's called on to heal a wound or defeat a virus. It's why your sprained ankle swells or you form a scab. And after your immune warrior cells win their war, inflammation fades away.

But what if the immune system can't win the war, because your body is under attack from chronically elevated blood sugar, a constant flow of stress hormones or going-nowhere belly fat? Then inflammation persists and becomes as damaging to your organs, cells and sex life as California's 300,000-acre Mendocino Complex fire and as hard to put out.

In Dr. Mike's upcoming book, "What to Eat When," you can discover effective ways to tame the flame. Here are a few:

1. Don't eat flame-throwing, sugar-added or processed foods, especially at night. Inflammation increases while you're at rest.

2. Eat a plant-centered diet with lean animal proteins (no red meat). Get prebiotic fiber from 100 percent whole grains and produce.

3. Aim for 60 minutes of physical activity daily. Walking counts, but getting hot and sweaty cools off inflammation more quickly.

"Kaizen" is a Japanese word that means "improvement" or "good change" and it's also the name of a philosophy that's focused on making small changes that boost performance from top to bottom in business (Toyota follows it) and in your personal well-being.

But can kaizen apply to brain health too?

Well, researchers at the University of California and the University of Tsukuba in Japan wanted to see if they could measure immediate improvements in the brain from small, positive steps. In their study, published in the Proceedings of the National Academy of Sciences, they had 36 young, healthy adults do 10 minutes of yoga or tai chi. Afterward, the participants had a brain MRI scan.

That small amount of physical activity created measurable changes in that part of the brain involved in laying down memories (the hippocampus) and in another that handles detailed memory processing. A memory recall test also found that participants had improved memory performance.

That's good news if you're one of the 77 percent of American adults who don't meet minimum guidelines for aerobic and strength-building activities. It shows that you can build up your activity level by making one good -- small -- change at a time and still reap immediate improvements in your brain health, as well as upping your chances of getting a good night's sleep and managing stress.

Start with 10 minutes of yoga or walking daily. You'll become sharper, smarter and a whole lot less stiff! Then set your sights on increasing the time to 30 to 60 minutes a day, one step at a time.